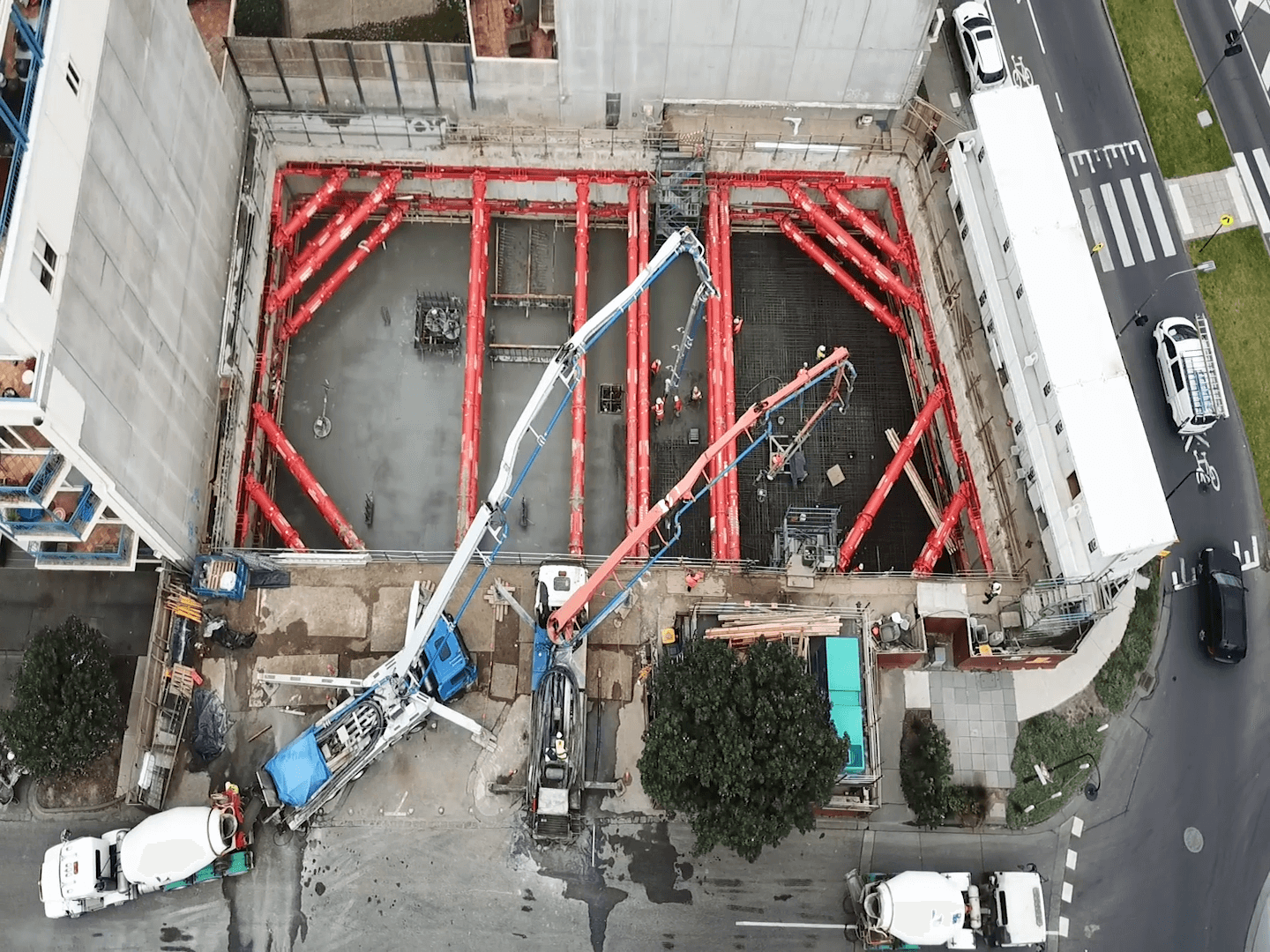 An impressive shoring arrangement has been used in a basement retention system on a difficult site comprising sand, Moray Street Gravels & Coode Island Silt located less than 100 m from the shore of Port Phillip Bay.

Two rows of hydraulic MEGA braces provided by Coates, each up to 1050 mm in diameter and 250 tonnes in capacity, support the 2-storey basement’s 8 m deep, 500 mm thick diaphragm walls.

The basement excavation has been undertaken by head contractor, Camillo Builders (part of Crema Group), as part of the The London apartment project located on Beach Street in Port Melbourne.

“The original concept design included ground anchors to support the basement walls, but we quickly realised that this wasn’t going to be feasible due to the poor soil, high water table and close proximity to surrounding buildings, coupled with the requirement to maintain very stringent criteria for deflection and potential settlement,” says McCarthy.

This realisation led to a redesign of the basement retention system, including a groundwater management system to balance the hydrostatic loads that would be imposed onto the site during the excavation phase.

Before construction could commence, the project team had to remove 18 m long timber piles that supported the London Hotel which previously occupied the site.

“We couldn’t pull them out or dig them out so Wagstaff devised a strategy of demolishing them progressively from the top down in a ‘segmented caisson’ style approach using bentonite as backfill to support the excavation.”

The 17 m deep diaphragm wall could then be built in 2.5 m lengths using bentonite for excavation support.

As excavation progressed, each strut was set up on street level and lifted down by a 90t mobile crane, and installed into walers.

The design of the struts had to consider the loads from hydrostatic pressure, the irregular shape of the site and the buildings components that would be installed while the struts remained e.g. lift and stair cores, car park ramps and the tower crane.

“We also had to consider the logistical issues to remove the struts once the structure was in place.”

A total of 32 struts were installed to adjoin walers on the faces of the 2-storey basement walls.

The dewatering strategy implemented during excavation saw the installation of 5 groundwater wells 12 m below the water table.

“We had to remove enough water to prevent uplift of the excavation diaphragm walls but too much dewatering would lead to settlement around the perimeter of the site,” says McCarthy.

Once excavation was completed and struts were installed, the 800 mm thick hydrostatic slab was poured on top of CFA piles to form the B2 slab. The purpose of the hydrostatic slab is to resist significant uplift pressure that the groundwater will be applying to the structure.

“The hydro slab is 800 mm thick and contains over 100 t of conventional reinforcing steel,” explains McCarthy.

The slab has been constructed over a waterproofing system provided by Cetco and both of the basement slabs were poured using specially designed concrete mixes to achieve minimal shrinkage, high early strengths and enhanced durability.

Once the struts are removed, the basement walls will be permanently retained by 2 basement floor slabs and the ground level slab tying the system together.

“It was a challenging and arduous process, but ultimately the project’s success can be attributed to a thorough collaboration process between the engineers and specialised contractors from the design phase right through to construction.”