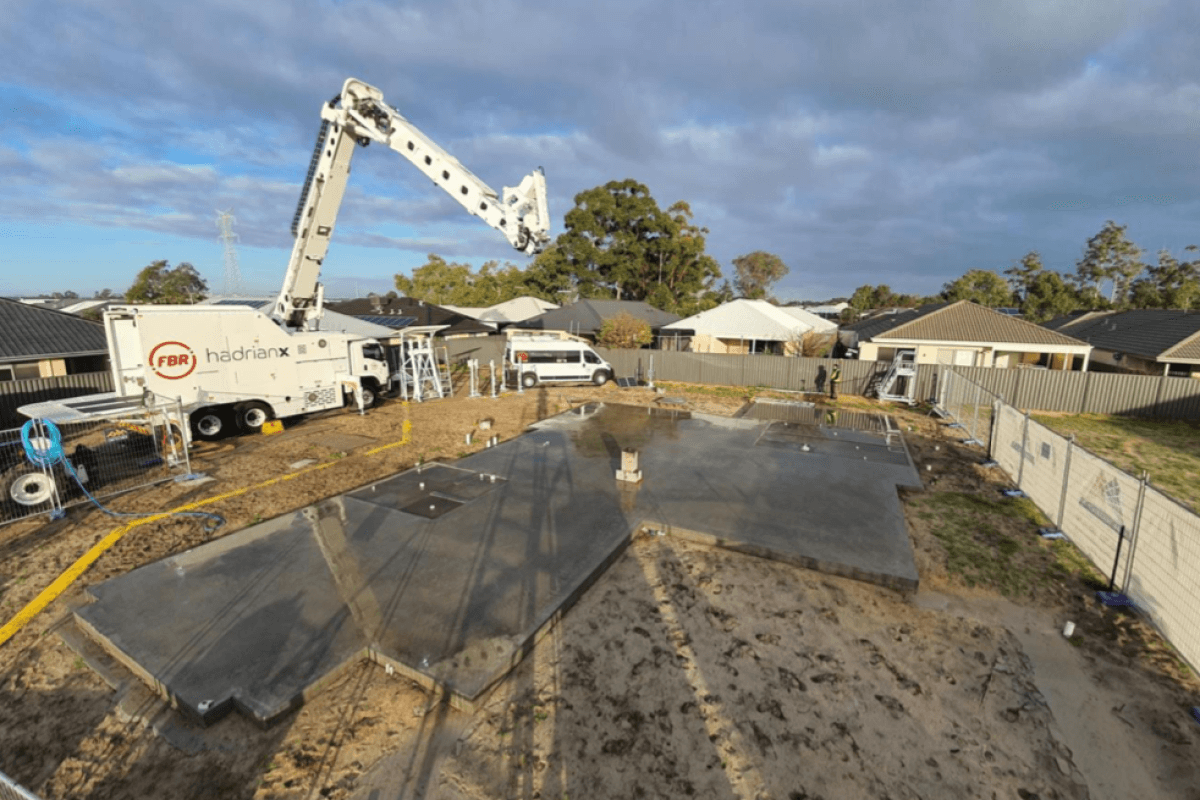 Born out of an idea meant for a different industry, the technology powering the autonomous bricklaying robot Hadrian X has been in the making for 15 years.

In that time, it has been a rollercoaster of a ride for Western Australian founders Mike and Mark Pivac. The technology has been buried, brought back to life, received millions in investment, floated on the stock exchange and lost the faith of many investors. But now, it has successfully bricked up a display home in Perth’s Dayton.

Hadrian X landed on site on the afternoon of Tuesday July 7, 2020 ready to start work at 7am Wednesday morning. Just 3 and a half days later, the structural inner skin walls were complete. Now, real bricklayers will lay the face bricks and the house will be finished as normal.

“Humans have been laying bricks in the same way for the past  6,000 years. Until now.” - Fastbrick Robotics

This marks a major milestone for the company, Fastbrick Robotics (FBR), and provides validation that the technology can actually build habitable houses on real sites.

“We had a great gathering for the last brick as it went down on the structure, so that was a moment in time we won’t forget,” says CEO Mike Pivac. "Digital construction has taken a significant step forward with the completion of this structure using the Hadrian X, the world's first and only mobile autonomous bricklaying robot.”

There were no major issues during the build except for a couple of small hiccups. The glue pumps couldn’t keep up with the laying speed - not a bad problem to have - so the team installed a larger hose onto the pumps.

“From here, we will review our performance and apply our learnings from this build as part of our continuous improvement program,” says Mark. “Finishing ahead of schedule for our first build on a residential site is a pleasing result for the company.”

The founding cousins say that they can further improve laying times by calibrating Hadrian X to handle larger blocks which will “allow the Hadrian X to build approximately 25 percent faster.”

Before commencing work, Hadrian X reviews the CAD drawings of the house, creates a 3D model and plans its build. It even works out which bricks need to be cut and where those off-cuts can be reused, reducing waste.

Hadrian X consists of a large telescopic, robotic boom mounted onto a 25-tonne truck. A separate skid houses the electrical equipment and a van houses the controls. These all connect together and plug into the on-site 32-Amp power.

A telehandler loads pallets of bricks into the back of the truck, which Hadrian then picks up, cuts (if needed) and feeds to the end of the boom where adhesive is applied before its placed into position.

With a reach of 30-metres, Hadrian can stay parked in the same position for a standard single-story house. The corners are laid first to align the software with the floor slab and ensure the grid is correct.

At times, blocks may be misplaced due to obstructions or other reasons, and Hadrian will flag it for manual adjustment by the crew.

The blocks and adhesive used are both specially designed for Hadrian The blocks are 12 times the size of regular house bricks but weigh less whilst the adhesive solidifies in 45 minutes, allowing higher wall construction in less time. The company says the adhesive provides a stronger bond and better acoustic and thermal performance than regular cement mortar.

The key technology that allows Hadrian to work outdoors is what inventor and FBR CTO Mark Pivac calls Dynamic Stabilisation Technology (DST). This allows Hadrian to account for real-time vibration, wind and boom movement when laying each brick.

"I invented DST to solve the problem of stabilising a robot at the end of a long moving boom, originally for an application that didn't have enough demand to justify its development cost. A decade later, a building boom converged with a shortage of bricklayers, driving the cost of laying a brick up to $1.25. I knew my idea's time had come," says Mark.‍

The completion of the display home marks the second stage of a 3-stage ‘Building Pilot Program’ that FBR has entered into with Perth home builder, Archistruct Builders & Designers.

The first stage involved constructing between 5 and 12 homes in FBR’s factory to ensure compliance, structural verification and quality control. The third and final stage will involve Archistruct engaging FBR under a subcontract to build the walls for a real customer’s house.

“The Building Pilot Program Agreement with Archistruct allows FBR to demonstrate to a customer the speed, accuracy, safety, quality, waste profile and reliability of the Hadrian X…in a low-risk environment, as well as the performance of the new Hadrian-optimised blocks developed and supplied by Brickworks,“ says a company statement.

Fastbrick Australia intends to enter into similar pilot program agreements with other customers as part of its commercialisation strategy.

FBR recently discontinued a joint venture with Brickworks due to COVID-19 uncertainty, which saw the company’s share price take a dive. FBR announced in June that the two parties mutually agreed to discontinue the joint venture, Fastbrick Australia.

In 2018, Caterpillar walked away from a memorandum of understanding with FBR and sold its 2.13% stake, with market commentators suggesting that FBR could not demonstrate the commercial viability of its technology.

FBR previously suggested that Hadrian X would be offered for purchase with a price tag of $2 million. However, FBR have reconsidered this strategy and instead will offer bricklaying as a service instead of selling the equipment, in what they are calling Wall-as-a-Service™.

The anticipated cost of mobilising Hadrian X and its associated convoy of plant and equipment has not been disclosed by the company. Clearly it’s still a work-in-progress as they continue to ramp up the speed at which Hadrian can lay in an effort to increase output and improve competitiveness. But Mark says the robot is already “extremely competitive against manual bricklaying.”

“When you consider that manual brick and block laying costs globally vary anywhere from $10 per square metre to $100 per square metre, we are already cost-competitive across a broad range of the market at 200 blocks per hour,” says Mike.

Whether Hadrian will be beneficial over conventional bricklaying is yet to be confirmed and will depend on:

(1) Output - can it lay enough bricks per day to drive the cost per brick laid down to be cheaper than a bricklayer?

(2) Reliability - will it be able to work full weeks without breakdowns crippling its productivity?

We’ve seen the machine build one house successfully, but after 1,000 houses how will the machine operate?

The machine and its ancillary plant takes up a lot of space on site so it will probably be limited to operating on suburban blocks. Still a big market, yes, but the amount of mobilisation and setup required is substantial: a truck, a control van, a telehandler and an electrical box. You’re paying 3 or 4 people just to get the equipment onto site.

This is particularly concerning as Hadrian only completes half the brickwork - it doesn’t lay face bricks. So, conventional bricklayers still need to finish the job.

FBR’s biggest contender is SAM100 (short for semi-automated mason) by New York-based Construction Robotics which is already in commercial use across the U.S.

SAM is another brick-laying robot but this one is mounted on a moving trolley that follows the line of the wall to be built. SAM muds the brick and places it autonomously on the wall, while progressively moving along the wall. Bricks and mortar are manually fed into the machine by someone following along.

Construction Robotics says 11 machines are operating across the U.S which have completed 100,000 sqm of wall. The machine can be purchased for $500,000US and it is claimed to be 3-5 times faster than an average brickie, laying 3,000 bricks a day.

Construction Robotics concede that SAM is only semi-autonomous (as it requires a worker to follow along and feed in bricks and mortar) allowing FBR to lay claims on ‘the only fully autonomous mobile bricklaying robot’.

This is a deceiving statement for potential investors. Whilst Hadrian is somewhat more autonomous than SAM, the reality is that Hadrian requires monitoring, manual fixing of any mishaps, loading in bricks with a telehandler and requires the FBR team to do it.

SAM is advantageous because it can be operated by anyone and can lay face bricks with normal mortar, eliminating the need to engage two separate subbies to finish your brickwork.

Meanwhile, several 3D printing companies are starting to take a slice of the autonomous construction market. Boston-based Apis Cor are responsible for the biggest building ever 3D-printed, a 2-story administration building for Dubai Municipality.

Winning over consumers’ and builders’ trust will be FBR’s biggest battle. The completion of the display home provides FBR with a means of showing that their technology works and their walls perform.

Completing stage 3 of their agreement with Archistruct will be their first commercial engagement and the true test - whether someone is prepared to part with their hard-earned for a robot-built house.

Over the next few months, FBR says they plan to continue improving the technology to boost its performance even further, then ‘scale up’ and take it global. They are currently in the process of building demonstration houses in the warehouse for the European, US and Mexico markets.

“Over the coming weeks and months we should be able to come back to our supporters and give them a view as to how we see 2021 forming in front of us,” says Mike.

“Just because we’ve been out here in the suburbs and built a house over the last 3 and a half days, it’s not where we’re going to stop. We’re always intending to improve the performance, speed, accuracy, safety and waste reduction of Hadrian,” says Mark.