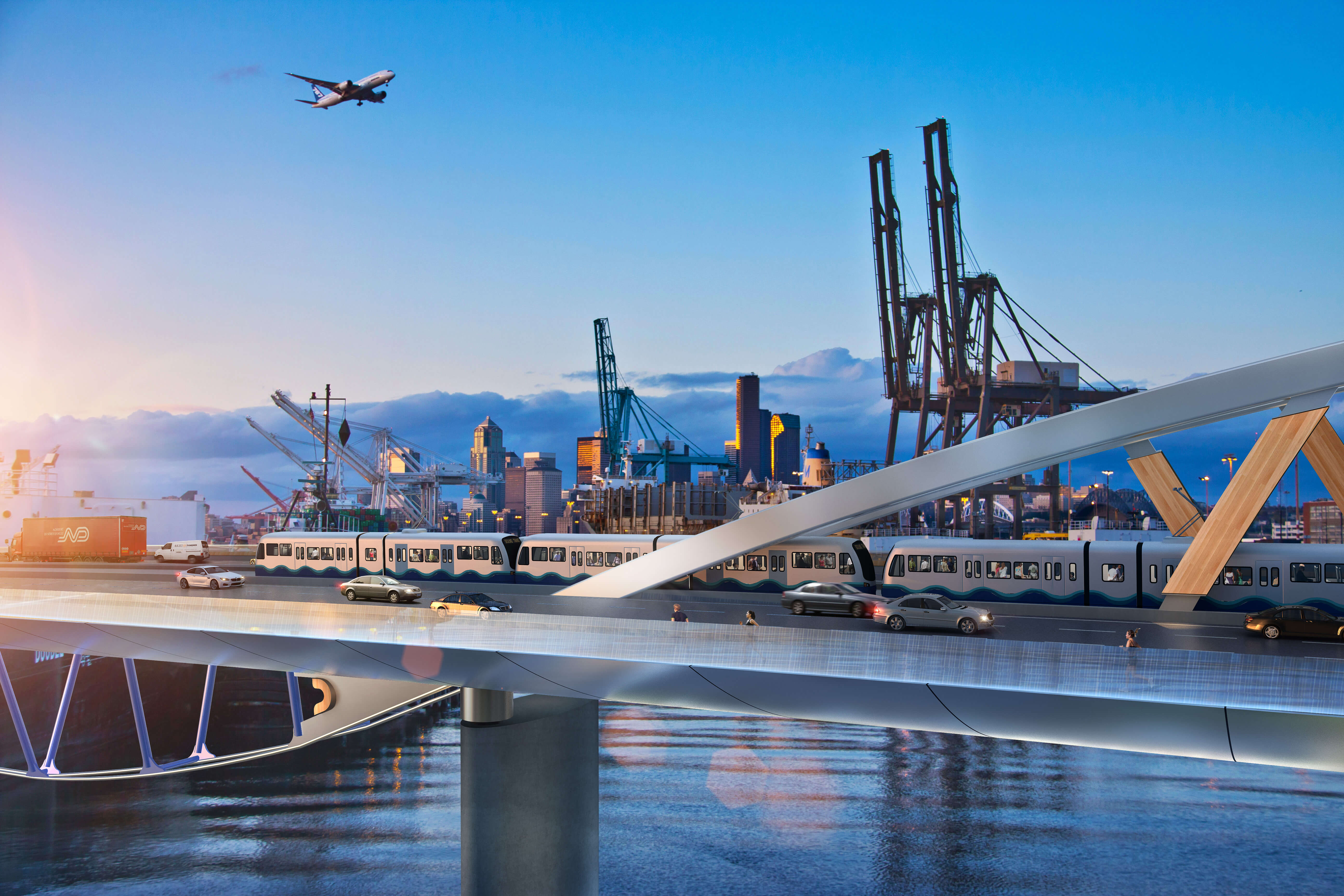 A proposal for the reconstruction of the failing West Seattle Bridge has been put forward that utilises a hybrid timber and steel arch structure. B+H Architects, SMEC and Robert Bird Group (all owned by Singaporean government-owned infrastructure behemoth Surbana Jurong) have put forward the unsolicited design proposal which they say will provide a sustainable, lightweight structure that is easy to maintain, and aesthetically eye-catching whilst being adaptable to future transportation changes.

The proposed design for the approx. 800 m bridge consists of compression arches made of steel tube sections, with 150 mm hangers consisting of mass timber with a steel or carbon fibre core suspending the deck.

“We envision the West Seattle Bridge as a functional, beautiful monument to the innovative and conscious populace it serves,” the proposal says.

The timber hangers would range from 8.5 to 15 m long, and the end grains capped with steel to prevent water and moisture ingress. Steel connectors, approx. 1 m in length, would connect the hangers to the deck and the arch.

A sinuous form of arches continuing above and below the deck enable the 180 m and 115 m spans of the structure. The underdeck arch would incorporate longitudinal stainless-steel cables or carbon fibre tensile strands. The deck would comprise of transverse steel trusses and be supported by concrete piers.

The proposal says that the use of mass timber-steel composites can “reduce the stress range in the hangers and potentially improve their fatigue performance”.

“In environmental terms, timber serves as a carbon sink with a comparatively low embodied energy footprint; it is the only renewable building material. [Using timber will] put Seattle on the map for fuelling an economy based on renewable resources.”

B+H says by using timber, the bridge’s existing concrete foundation and piers can be reused, further contributing to a lower carbon footprint of the bridge.

B+H referenced other bridge projects using similar materiality, such as Mistissini Wooden Bridge in Quebec and Sneek Bridge in the Netherlands.

The West Seattle Bridge opened in 1984 and is the city’s most used bridge, carrying an average of over 100,000 vehicles a day. It is the primary connection between West Seattle and the rest of the city.

The bridge was closed in March 2020 due to worsening cracks in the post-tensioned concrete box girders. Cracking in various areas on the bridge had been known for a while, but recently the cracks had extended 60 cm in one month, sparking the mayor of Seattle to declare a civil emergency and order the immediate closure of the bridge.

The cracks are suspected to be a result of excessive long-term concrete creep causing steel stressing cables to slacken, reducing the load-bearing capacity of the girders.

Stabilisation works have commenced whilst a feasibility study is undertaken to determine the fate of the bridge. Officials say they are considering 6 options, 3 of which involve remediation and 3 involving replacement.