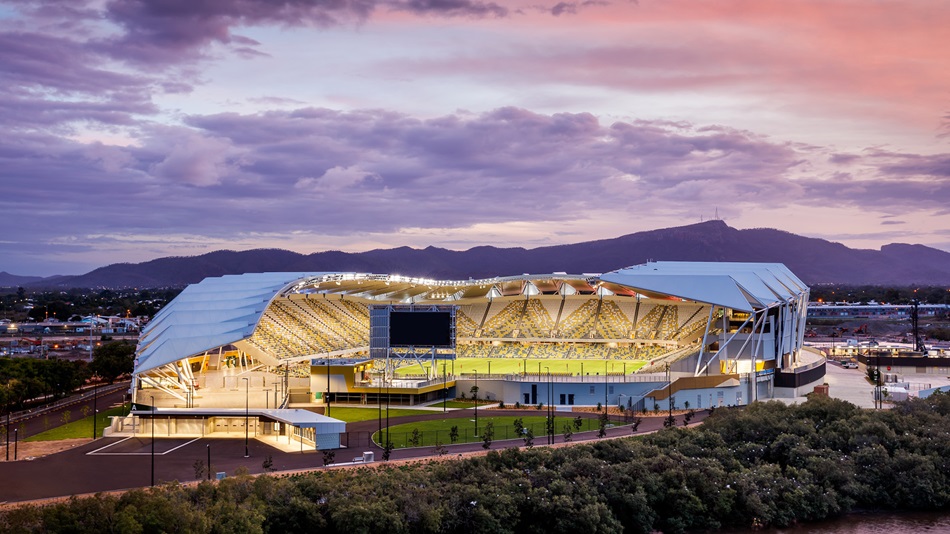 Stadium Roof Inspired by a Leaf ..and Other Winners from Australia’s Most Innovative Engineers 2020

The brightest engineers improving our world have been recognised by create’s Australia’s Most Innovative Engineers 2020 awards.

30 engineers were awarded across 10 categories including building & construction, community, utilities, manufacturing & automation and more. The innovations tackle some of the world’s biggest challenges to improve process, safety, sustainability, and efficiency.

Here’s a closer look at the winners:

Inspired by the leaf of a pandanus tree, Rathie developed an innovative structural system for Queensland Country Bank Stadium. Rathie first experimented using origami to mimic the behaviour of the leaf and develop it into a workable solution for the stadium roof.

The result was the use of folded plates to stiffen the cantilevered roof instead of using trusses, whilst still providing enough strength to withstand cyclonic winds.

This solution eliminated the need for horizontal ties on the outside of the roof, which allowed the design to satisfy the architectural intent of creating the stadium’s emblematic “kites” cladded on the roof backstays.

Works to upgrade Sydney’s Central Station for the new metro have continued whilst the station remains almost fully operational, posing a range of construction and engineering challenges.

Chernyavsky and his team engineered a solution to construct the new northern colonnade and canopy over a major thoroughfare without impacting pedestrians entering and exiting Australia’s busiest train station. They designed precast concrete colonnade and steel-framed roof segments that could be rapidly installed during a 4-hour window at night whilst train services have stopped.

“By designing prefab components with four simple connections for rapid on-site installation, we eliminated the need for temporary works or falsework that would otherwise interfere with commuters,” Chernyavsky told This Is Construction.

Borne out of Laing O’Rourke’s R&D team, Kirchner and the team at Presien have developed an AI-powered camera with computer vision to identify workers in blind spots of moving plant and equipment.

The camera is connected wirelessly to alarm systems that alert the driver and any other team members of the workers presence through visual, audio and haptic feedback.

Toolbox Spotter has been trained by over 100,000 hours of video footage of worksites to learn how to identify workers and their behaviour.

“Toolbox Spotter sees objects, understands what they are, and what actions to take, seamlessly and in real-time, with no special tags or markers or changes in normal site operating procedures,” the company told This Is Construction.

Rechichi developed a battery-powered robotic crawler that can enter tunnels as small as 1.6 m in diameter to conduct a safety assessment prior to worker entry.

The crawler assists crews entering unlined rock tunnels by allowing them to first inspect the tunnel remotely via high quality cameras. It then accompanies crews into the tunnel and provides lights, power, cameras, communications and safety equipment.

The crawler has four-wheel drive, an articulated body for tight cornering and can even clear small boulders and debris with its hydraulic blade.

Optimisation Software to Reduce Energy Use of Building Plant

Through clever application of machine learning to collect and analyse data Stewart has developed software that creates digital twins of chilled plant. This allows building operators to test various control strategies under a range of scenarios.

Combined with IoT (Internet of Things) equipment sensors, the software allows real-time optimisation and performance tracking to reduce CO2 emissions by up to 35,000 kg/year for a typical large office building.

Deeks developed a solution by creating software to automatically apply data into multiple scenarios to identify the highest risk areas. By applying the algorithm to spatial data for the entire Hunter region, the equivalent of 57,000 2D models could be created to process 35 billion flood hazard combinations.

This created a database of potential consequences for every water main segment, allowing Hunter Water to identify the high-risk mains that required extra monitoring, renewal or replacement.

“Traditional manual methods used to build each ﬂood model aren’t possible for 57,000 models. So I needed GIS tools and processes to automate the build,” says Deeks.

ConnectSTEM is a membership program that facilitates education, collaborative partnerships, and storytelling to address gender imbalance in engineering.

Thin, flexible and disposable electronic tattoo for the vision impaired that generates a high-resolution tactile sensation on the skin.

Novel neural network framework to predict localised rainfall and estimate the probability of sewer pump station overﬂow up to six hours in advance.

Artificially intelligent system that can identify protected objects, people and symbols, such as hospitals, in near real-time for military operations using computer vision at very high probabilities.

In addition, Lwin and his team developed the first braced dual anchor mast arrangement, and Melbourne’s first use of a Tensorex spring tensioning anchor system for overhead catenary and contact wires, resulting in a sturdy and compact anchor assembly requiring no heavy weights or guide rods.

Developed a range of tools to encourage engineers to sit on corporate boards, to help improve evidence-based decision-making and to work towards achieving the United Nations Sustainable Development Goals.

Created a program called Strengths in Diversity that fosters a diverse culture in organisations by focusing on talent and shifting focus away from characteristics such as age, gender and cultural background.

Designed a program that incentivises carbon savings, provides mechanisms for buildings to self-optimise energy consumption, creates a commercial model where projects are funded by operational savings and enables a platform where researchers have a testbed for innovation.

Designed and implemented a data visualisation and analytics platform that brought together asset condition data into a single online platform for condition monitoring and identifcation of early signs of asset failure.

Produced a new amorphous silica-alumina catalyst with stronger acidity than any other silica-alumina material created before to reduce the amount of coke left behind in hydrocarbon production and further decrease carbon dioxide emissions from coke-burning during oil reﬁnement.

Developed and patented a class of 3D-printable synthetic bone substitutes that are simultaneously bioactive, strong and resorbable capable of healing large bone defects, and withstanding the stresses and strains of weight-bearing parts of the body like the spine.

Developed a highly robust plasma coating that mitigates issues associated with firm bone bonding in implants by mimicking the surrounding tissue increasing the likelihood of an implant fusing to the host bone and reducing the chance of rejection or infection.

Developed technology that maximises the energy recovered from wastewater by using a byproduct of the wastewater treatment itself, free ammonia, to produce biogas.

Developed an innovative design toolkit to optimise wastewater sludge pipeline systems that can predict pressure drops to an accuracy of 10 per cent.

Developed enzyme-containing implant technology to locally produce nitric oxide at the right place, in the right dose, and at the right time to aid wound healing, dilating blood vessels, and lowering eye pressure in glaucomatous eyes.