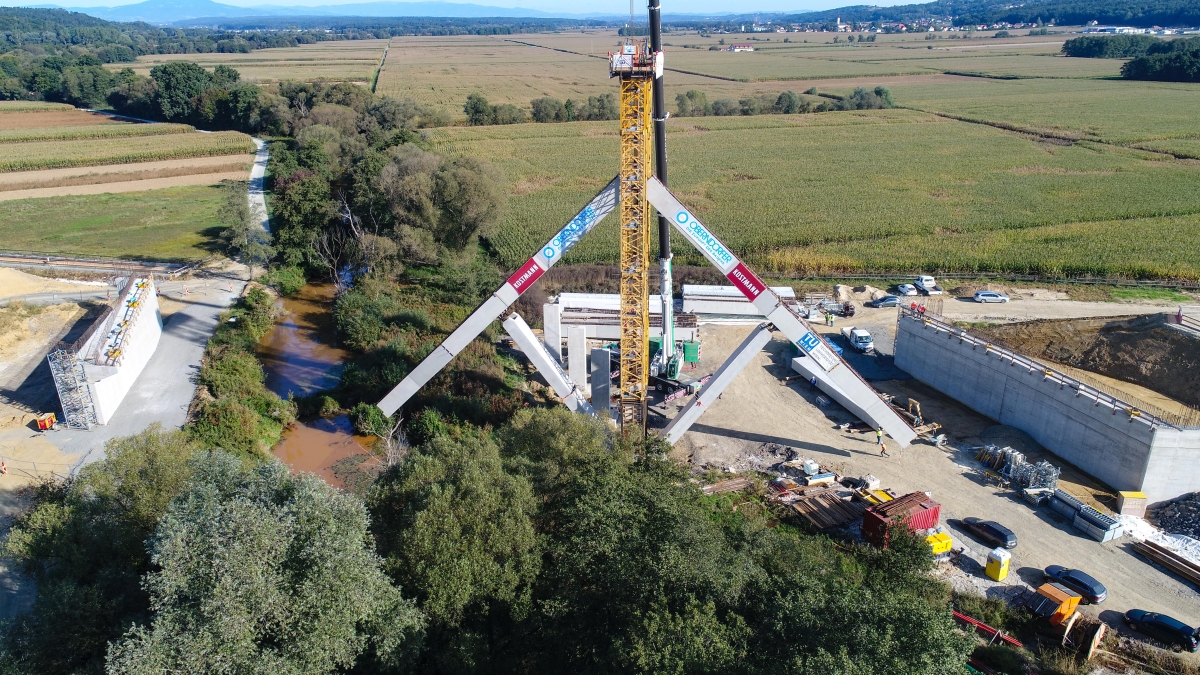 The Vienna University of Technology (TU Wien) has developed a new bridge-building technique which has the potential to substantially reduce build cost and time.

The ‘balanced lowering method’ works on the same principle as opening up an umbrella.

After a concrete bridge pier is constructed as normal, trusses are attached vertically.

Girder formwork made from prefabricated thin-walled steel are craned into a vertical position and attached to the trusses. These are initially hollow with reinforcement positioned inside.

The two girders are joined together at the top with a hinge. This joint is then hydraulically lowered whilst struts support the girders mid-span pushing them to extend outwards.

Once in place, the girders are filled with concrete and additional suspended girders are installed to complete the span and adjoin the abutments.

Researchers have been undertaking large-scale tests since 2010 and refining the technique but it is now being used for the first time in a real application - for two bridges on the Fürstenfeld Motorway S7 in Austria.

Johann Kollegger of the Institute of Structural Engineering of TU Wien said “erecting bridges using scaffolding usually takes months. The elements for the balanced lowering method on the other hand, can be set up in two to three days, and the lowering process takes around three hours.”

In a statement TU Wien said the balanced lowering method is particularly advantageous for the erection of bridges in difficult terrain or terrain that should not be disturbed such as a nature reserve.

As for spans, the two bridges constructed for the motorway used 36-metre long girders. Four lowering processes were undertaken for each bridge to achieve the required roadway width.

Kollegger says that many design details had to be resolved over the years – from the metal joints that have to withstand the forces during the lowering process, to the hydraulic jacks which are needed for the gradual lowering of the entire construction.

“Now that we have proven that the method is well-engineered and works perfectly,” says Kollegger, “we hope that it will prevail and will soon become one of the common bridge building methods that are used around the globe and that the S7 Motorway will become an international pioneer.”